Monetary policy easing in the United States fueled by worries about the economic impact of the coronavirus is endangering the dollar’s years-long rally and giving a boost to currencies around the world.

The U.S. Dollar Currency Index (=USD) shed most of its gains for the year over the last few days, as expectations grew that the Federal Reserve would ease rates to cushion the U.S. economy from the ripple effects of the a spreading coronavirus outbreak.

The Fed acted on Tuesday, delivering a 50-basis point emergency rate cut, with many traders expecting at least two more such moves in coming months.

But while U.S. policy rates, which stand at a target range of 1.00% to 1.25%, have more room to fall, many rates in Europe and Japan are already below zero and monetary authorities there are hesitant to lower them much further.

Officials in those countries have discussed the prospects of using fiscal measures to boost their economies, which some believe could support their currencies, further narrowing the gap in yields that has drawn income-seeking investors to the dollar in recent years. 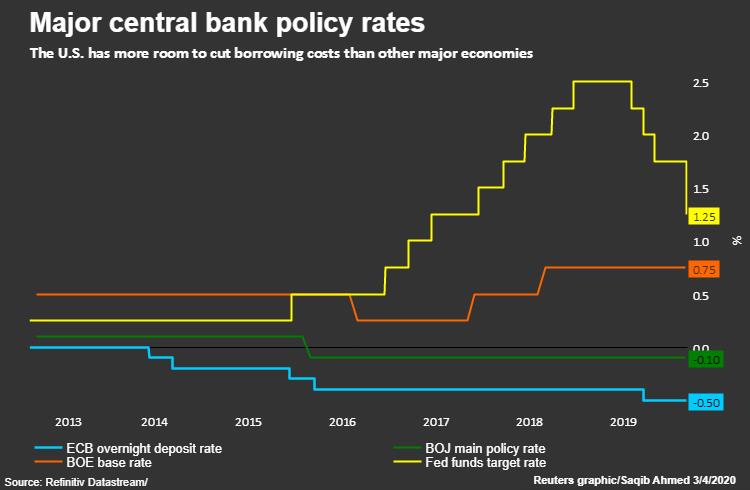 At the same time, the dollar has been pressured by a powerful rally in the euro fueled by risk-averse investors unwinding carry trades, a strategy that involves borrowing in a low-yielding currency to invest in a higher-yielding one.

The euro zone’s ultra-low interest rates have made the single currency a popular funding vehicle for such strategies, which have become less appealing as market volatility has grown.

Net futures bets against the euro by hedge funds and other speculative traders were at a more than three-year high, according to U.S. Commodity Futures Trading Commission data through the week of Feb. 25.

The firm is recommending that clients bet on the British pound to rise against the U.S. currency, on the belief that the U.K. government is likely to deliver fiscal easing.

A weaker dollar would be a boon for U.S. multinationals that have already taken a hit from the coronavirus’ impact on global business conditions because it makes it less expensive to convert foreign profits into the U.S. currency.

A falling greenback could also soften the coronavirus’ impact on the economies of developing countries, making it easier for them to service their dollar-denominated debt.

Stephen Innes, chief market strategist at Australian FX-service provider AxiCorp, is recommending betting on the Japanese yen and euro to rise against the U.S. currency as the Fed cuts rates further.

Fed funds futures for June 2020 on Friday implied traders are pricing in an 84% chance of at least a 25 basis point rate cut at that month’s meeting.

“With the Fed cutting again and the ECB limited in scope, U.S. dollar weakens,” Innes said. “I’m more committed to dollar short than at any time in the last tow years.”

Other investors, however, have noted that expectations that the outbreak will be less damaging to the U.S. economy than others may work in the dollar’s favor.

“What we could be looking at is a multi-stage cycle here where the dollar falls a bit but eventually recovers as the spread of coronavirus continues to impact economies elsewhere,” he said.

High Risk Investment Warning: Derivative options trading involve significant investment risk, we strongly recommend that you read and understand the terms and conditions. Although every independent risk derivative options trading are flxed. However being a trader,the investment operation is flexible,which may cause you to lose partially or all of the original investment, especially if the trader invest on single online trading product. We strongly recommend investors to choose an appropriate tradiing method and asset management make good control of consecutive trading and total investment.